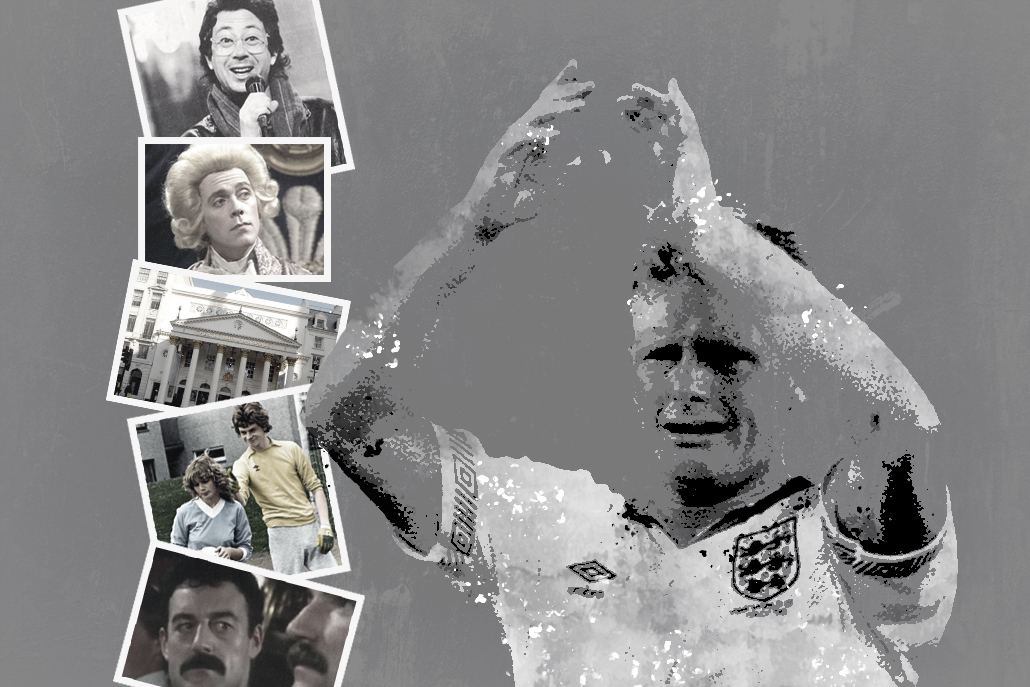 To avoid the 1966 World Cup Final Denis Law famously went for a round of golf. To avoid the 1990 England versus Germany World Cup semi-final, I did what any Scot would do if they found themselves on holiday in London at that time, got myself a ticket to the theatre.

For my generation, The Young Ones was incredibly special. Written by Ben Elton, Lise Mayer and Rik Mayall, the most brilliant, anarchic, silly and hysterically funny TV show. Ben Elton also co-wrote Blackadder from the second series (when it got good) and his stand up which featured on Friday/Saturday Night Live was really good in the 80s. Ben Elton was a huge hero of mine.

The Haymarket Theatre had Ben Elton’s play Gasping on, starring Hugh Laurie and Bernard ‘Yosser Hughes’ Hill . A sell out show. Did they have a ticket? Well because of the football, there were return tickets available, and I found myself in the third row, in a theatre, watching a play. I’m not a theatre person. Thanks to the combined skills of assorted Buckie High School English teachers ramming Shakespeare down my throat, I want it to stay that way.

Ben Elton though, so fingers crossed…

My fear that it might be ‘a bit theatrical’, or ‘a bit shit’ turn out to be unfounded. It’s like the telly, but better. They are here in the room, performing it! It’s really funny. And then, completely unknown to me, there’s a half time break just like the football, so a pause before we go back for more, the second half.

The half time interval drags on for quite a bit. Is this normal? The rest of the audience are getting a bit restless too. So captivated with this whole theatre thing, my new found love of the arts, from about an hour ago, I’ve forgotten something important.

The World Cup semi final, England versus Germany is going on.

I listen more attentively to this oddly boisterous and tense audience around me, it’s extra time. A few of them have radios. The long break in the play, is because the actors are watching the football! I’ve come here, to get away from the football, or more importantly the reactions of England supporters. I realise, I have made an enormous error.

What have I done!? Probably the only Scot in a huge f*ck off room full off rabid England supporters! This couldn’t be worse!

The atmosphere in the room is electric, almost exploding with tension. I am teeth clenched, awaiting a huge, deafening cheer with some dread.

Then it all goes very quiet. Perhaps a little sad. I wonder what has happened. My football radar ‘reads the room’ really quite quickly.

Well that’s a shame. Perhaps we can get back to that brilliant theatre thing I have very recently gotten into?!

Out they come for the second half of the play. This’ll be great!

It was awful. Even my ridiculously inexperienced theatre brain, can see a group of actors going through the motions of a ‘comedy’ performance unable to hide the fact they are devastated at a football result. The whole room is so flat and depressed I almost called the Samaritans for the lot of them. How something so brilliant, so funny in the first half, could in the second half be, what’s the phrase theatre critics might use? ‘be so f*cking shit’ was incredible.

This whole weird experience had led to me becoming the main character in my own play, in a theatre! It wasn’t just f*cking Gazza greeting that night! Hugh Laurie, you owe me £1.75!

The lights go up, it’s time to go home. This is the first time I can see ‘the enemy’ that I had in my own head been ‘captive’ in the middle of. They are all sad. There’s a deathly hush as everyone leaves the theatre. When you see their faces, it’s a bit different. The pain of a football defeat, that we’ve all experienced. I feel bad for wishing them to have lost. And wonder what they might have been like had they won. They were just people wanting their team to win. I head off to the underground, the station is like a morgue. The noticeboard informing of the result, delicately written to inform those not yet aware of the result (pre-internet, kids). A deathly silence like the Queen has just been murdered engulfs London…

Feel a bit shit for hoping they’d lose. I get back to my sister’s, and the TV is on. Two minutes of the BBC wallowing in it, and oh thank f*ck they lost.

The absolute state of the Aberdeen support
Scroll to top