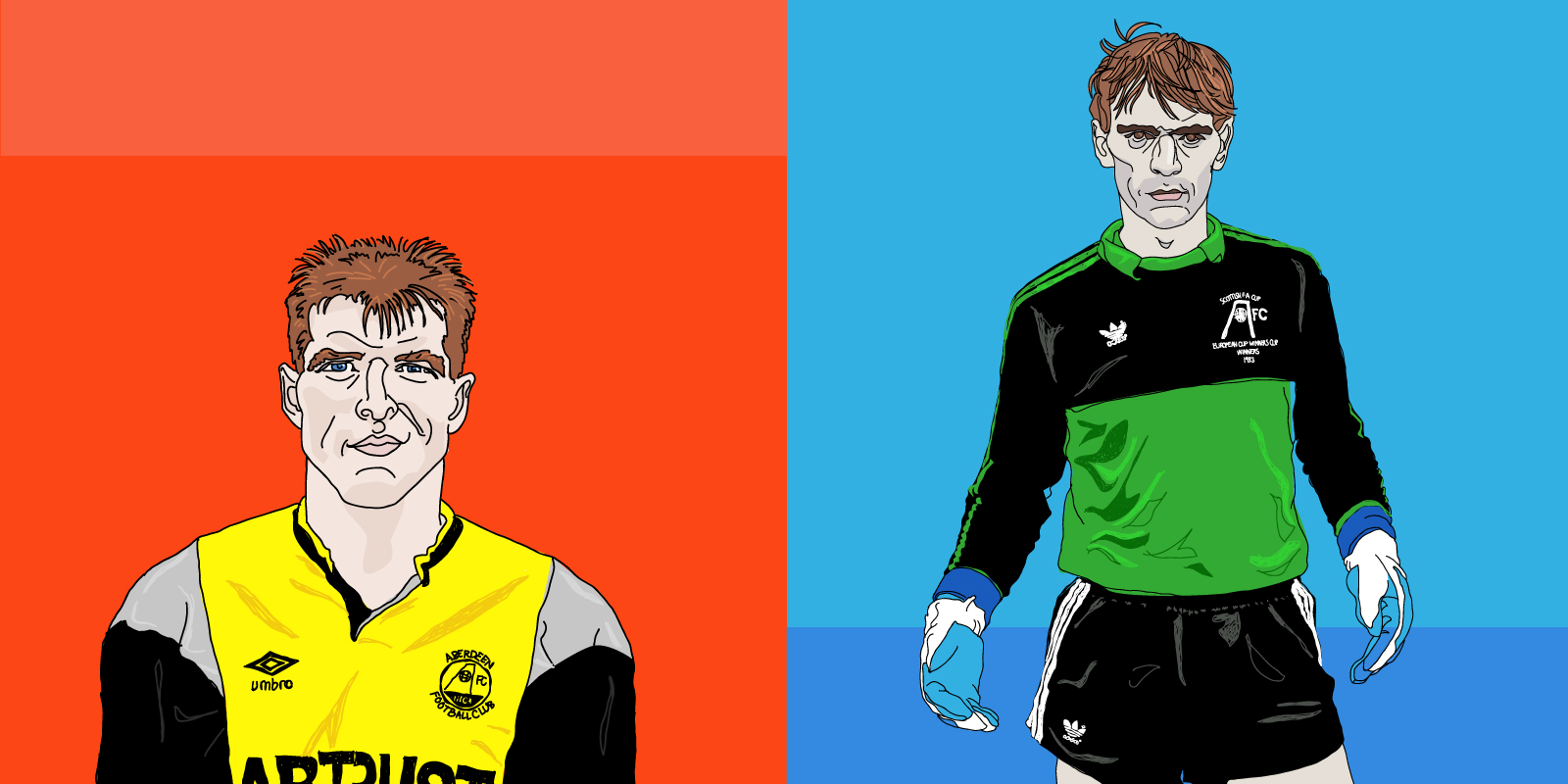 Do eight out of ten Caats prefer Leighton or Snelders?

Leighton versus Snelders who was best? Wrestling or football, okay then football.

I saw Jim Leighton play for Deveronvale as a kid. My Dad must have said to me, watch out for that guy on loan from Aberdeen.

So at Victoria Park, Buckie, I went and had a look, stood behind a goal, sucking on a Spangle, and most certainly not paying as much attention as I should. Rubbish at football myself, I did have the knowledge of This Goalie’s got Guts cartoonstrip in Scoop comic, so… my verdict was a big thumbs down.

As a stupid, shallow kid, I saw the lanky, skinny fella with the bandy legs and thought, nope, not gonna make it. A similar opinion the glory hunting tosspots at Old Trafford would later make.

Theo Snelders. Here’s a story for ya, might be nonsense (why don’t newspapers start their stories like that?). Football was very different back then. Footballers in England earned more money than in Scotland, but it was nothing like the difference now.

So Leighton left, Aberdeen got the tip off of Utd’s second choice, and Alex Smith (and the often forgotten co-manager during the good times Jocky Scott) got an introduction to a Dutch agent that lead to Mason, Van der Ark, Van de Ven, and the cherry on our Dutch hash cookie, Hans Gillhaus (pronounced Healhouse hipster kids). Gillhaus was let go of by PSV Eindhoven as they had just signed Romário de Souza Faria, that Romário.

It also lead to Theo Ten Caat, which is when they cottoned on to the quality not being quite so good, with clearly names they’d made up on the flight over…

Or at any rate, despite Smith being at Aberdeen a bit longer, and he loved a signing (no transfer windows then), no more Dutch players were signed. 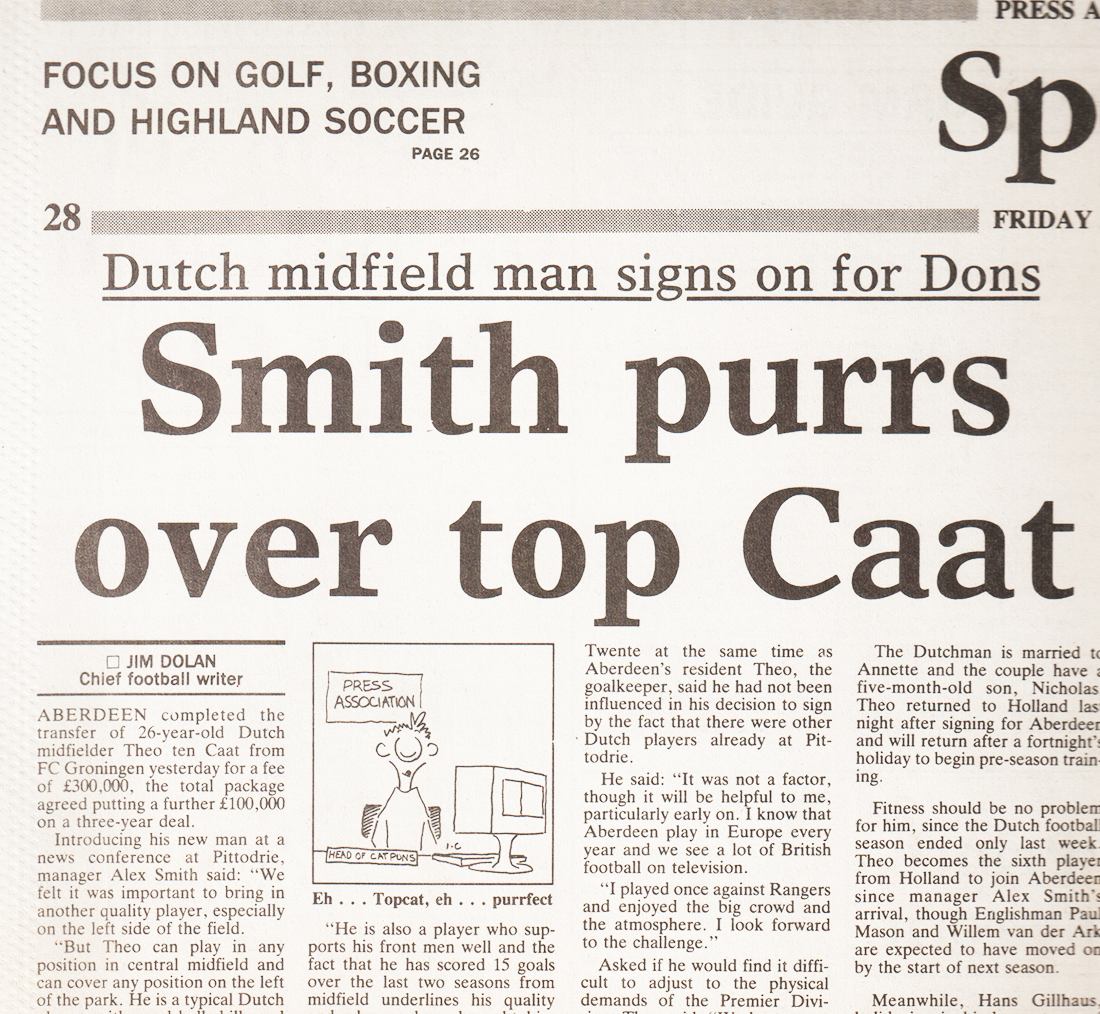 My cartoon, ‘Head of cat puns’, back when the P&J sold a few copies. Is it still going?

Who wants to be adored?

So who was best? Jim Leighton was a sensational keeper. At Aberdeen, he just didn’t make mistakes, and the occasional ‘you’ve no right to have stopped that’ save. Just incredible. He also formed a fantastic relationship with Miller and McLeish at club and country.

Theo Snelders was a brilliant shot stopper. Incredible reflexes, and very spectacular. He was also very good at kicking, he was Dutch, they of the totaalvoetbal. Even the goalie.

That defence in front of him, and the last years of Leighton, was arguably the greatest ever Scottish defence. Miller and McLeish (at the peak of their powers), with two incredibly fast, natural fullbacks in McKimmie, and the young David Robertson. That was some unit. For me that is the travesty of the Porterfield and Smith years, what could have been built in front of that defence. But wasn’t…

When Robertson left for Rangers. A little bit of satire occasionally got through the censors… The Press and Journal was a newspaper kids (a bit like a fanzine but not as funny) I think it closed a few years ago.

Jim Leighton was brilliant for the best part of twenty years. He had a couple of dips in form in that career. He was treated very badly at Utd. Alex Ferguson hadn’t conquered England yet. This ‘abrasive’ Scot, who had apparently done something or other in management in Scotland wasn’t popular with the English media, also with a large section of the Man Utd support (despite what they’ll say now). The Utd defence was poor. Pallister and Steve Bruce had only recently arrived, there was the Jimmy Greaves inspired ‘Scottish goalies are a joke’ which was cuntish behaviour from Greaves. Jim became the fall guy. And once that confidence pendulum is tipped, for a goalkeeper there’s no going back. If as a goalkeeper you play for twenty years, there will be some mistakes in your showreel.

The Stone Roses only released one and half albums worth of decent songs and look like the most amazing band ever. A lesson in the power of editing, and laziness (watch out for my forthcoming Ted Talk). Theo Snelders was sensational for a relatively short period of time. If you play at the top of your game for a few years, then disappear, you will look amazing. How much of that was down to the broken cheekbone sustained by Ally McCoist recklessly jumping into Snelders in the rain at Pittodrie, which weirdly never got a mention in the Glasgow media, who knows. Snelders didn’t appear to be quite the same after the injury. And became Rangers reserve goalkeeper during the ‘Sir David Murray money’s no option years’.

This brings me back to one other point in the Snelders versus Leighton debate. The ten year old me, judging Leighton, as a skinny, bandy legged, geeky looking fella. Our perceptions and judgements can be based on exceptionally shallow grounds. Theo Snelders was like a cross between a Greek God and Superman. He looked like a hero.

For me Jim Leighton was the best. The best keeper I’ve ever had the privilege to see, and he did it for decades, being written off then coming back with brilliant performances again and again. It could also be they were both brilliant, brilliant keepers, and it’s an age thing, those first heroes can never really get replaced. Particularly when they hold a couple of European medals. And I was into the band right at the very beginning, before everyone else. I saw them as Deveronvale… I knew they’d be huge, kinda.