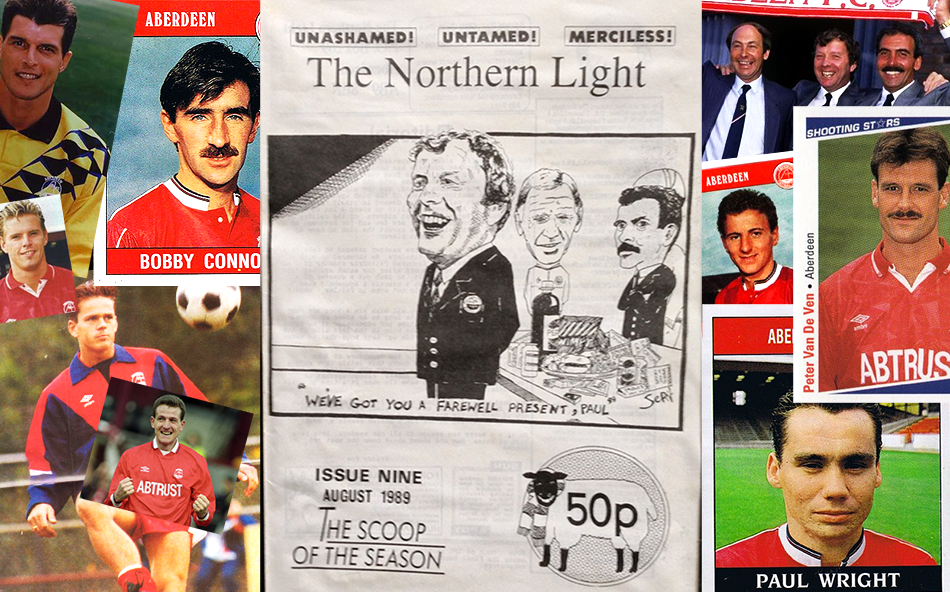 The Northern Light fanzine from 1989. Holy shit, it feels like yesterday. I was just an outside contributor, and probably the last regular to join. There was a core group who will be far more informed and knowledgable than me on the fanzine, but this is how I saw it.

There was some incredible talent associated with the fanzine. From Chris Gavin who would later serve on the board of the club, to Ally Ross selling his soul to the devil (Rupert Murdoch) and becoming first The News of the World’s TV reviewer then The Sun’s TV reviewer.  I’m sure he’ll regret the career decisions he made, from his solid gold castle somewhere very warm. There was Gio’s brilliant cartoons, including the cartoon strip Bobby’s Boots.

The writers wrote under pseudonyms so I’ll stick to that. Ferryhill Oracle’s Diary was hysterically funny, a first to be read when that familiar freshly printed smell of fanzine dropped through my letterbox, the sound of Chris’s Volvo gently pulling away. The brilliantly funny Major. Major Marcus A Reno US Cavalry retired, as I remember.  I may have missed some important contributors, it is twenty five years since I saw a copy. A shame they are not online somewhere.

But the real talent, in my opinion, was Gordon Reid. I met him maybe a couple of times quite briefly, so I can’t claim to know him, but his illustrations, his cartoons were, and are brilliant. His work was also the fanzine’s look and brand. I whined and bitched to get a front cover (that is my cartoon above), but now I can see it should always have been Gordon’s work. (Belated update) Actually that’s not true. Gio’s work was the perfect foil to Gordon’s. The minimalism and white space, contrasting Gordon’s heavily detailed, tonally dark work perfectly. Gio’s writing was also sharp, to Gordon’s blunt – in a very deliberate way. I saw some of Gio’s work for the first time in decades recently, and had forgotten his and Gordon’s ying and yang style contrast. And Bob Harper’s work is truly amazing. Actually, looking back the talent was the artists. We were carrying those useless fucking writers…

Back to Gordon. What I loved then as I do now with Gordon’s work, was the sureness of his style, and his line, together with a raw darkness to his humour. The instant recognisability of his work. His complete lack of compromise in his subject matter. He’s not angling to work for the P&J or the club. His ability to get his work out, produce all his ideas, that was just phenomenal to me. He was the finished product as an artist, and a great one at that. There really ought to be an exhibition of his work in Aberdeen Art Gallery.

After writing this article and posting it on Facebook, I found the lack of North East arts’ establishment recognition for Gordon Reid’s work drifting around my head. I realised it is simply because the majority of his work relates to Scottish football, and  Scottish football is working class. And the very large talent vacuum that blows through the North East between Gray’s School of Art, Peacock Visual Arts, Aberdeen Art Gallery and Marischal College, is very much middle class. They wouldn’t know a great artist if they met it in their consommé. I also believe if he were a Glaswegian or Dundonian, his work would be far better recognised, and be worth a considerable amount of money. So if you have one of his drawings, treasure it. These things sometimes happen way too late. That drawing might become your pension.

The best of The Dandy Dons this week on Facebook

The new away strip extended hoody
Scroll to top